Solid Wind Power's new turbine, Turtle, is currently undergoing the final tests before it goes on the market.
Solid has so far only done in turbines with pipe towers, but Turtlen can be delivered with a lattice tower manufactured by Carl C A / S.

A mill can be refined in many ways, but sometimes it's also about making it simple. Solid Wind Powers' "The Original" has a jack tower that can hydraulically lay the turbine down for service. The turtle has a crew basket, which the service people have to climb into. The clothing parts are only a third of that compared to the Original.
The 25 kilowatt nacelle does not have nearly as many noise reduction measures, but it is also not necessary when standing on a lattice tower, because it does not transport the noise downwards like a pipe tower. The lattice tower is also easy to pack, and it is designed so that it can be raised, which is an advantage in the Central European market, where you have to go higher to catch the wind.
All of this is something that makes the cost price lower, and in short, it gives a mill that for the same price as Den Originale gives an additional production, which is important for the investment itself, for the settlement per. kilowatt is the same no matter what the mill otherwise looks like.
It is intended for small and medium-sized farms, just as it can also be used on companies located on the outskirts of industrial districts. Another customer group is after-school centers, which are often located in places where it is possible to set up turbines and where it can provide a subsidy to become self-sufficient. 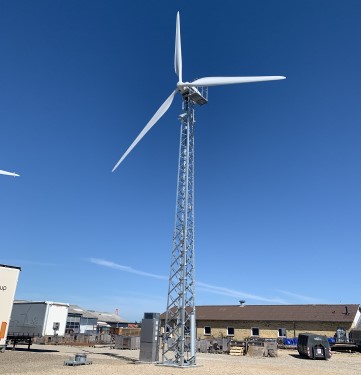