Specialist steel structure company Carl C. is benefitting hugely from the success of the wind energy industry and global roll-out of the 5G mobile network. The company’s owner, Allan T. Jensen, will therefore be celebrating a 50th anniversary and his own 25 years with Carl C. on 4 October.

“I love the old story of how my father was apprenticed by my grandfather, Chr. Øllgaard, who first founded IPL and then Landia, before bringing my mother into the company and went self-employed,” says Jensen with a smile.

“My own career choice of becoming a mechanical engineer and joining the company was almost automatic. I’m very much like my father when it comes to engineering, and had no problem understanding his technical approach,” adds Jensen.

Allan grew slowly into the role of future CEO and owner, and his thesis before graduating from Aarhus Technical University was actually on a machine able to bend iron rods into zig-zag shape.

It will be 25 years in January since Allan Jensen first joined his father's company. He became CEO in 2003, and took over the entire business in 2006

“My father died of Alzheimer’s at the age of 75 in 2010, so it was vital that I began to take over as quickly as possible. Being the head of the company is something I've learned along the way by attending courses, and sparring with Gunnar Ørskov. Fortunately, I have some fantastic employees who make it easy to manage. That's a bit different from the olden days, when my father decided almost everything. Nowadays, we have specialists employed at all levels, and we are working more and more in self-managed teams,” states Jensen.

“As my 25th anniversary approaches, I realised that in actual fact, the change in generation at the top has only just been completed. I can now make my mark on every decision concerning the company,” he explains.

When Allan Jensen joined the company just over 25 years ago, there were around 30 employees. The workforce is now 50, plus 3 robots in Production and 15 office personnel.

“The only thing I’ve added in my years as CEO is a separate Administration. But we are now thinking about whether to expand Production, because as wind turbines get bigger and bigger for example, the meteorology masts we make also need to be higher. Welding robots also need more space.”

He has therefore bought more land on Smedevej, to ensure space for expansion if needed

Export has always accounted for around 50% of sales, and Carl C. has exported masts to most countries in Europe, Africa, South America, South Korea, Jordan, Greece and the USA and UK in particular.

“Roughly a third of our mast sales comes from the energy sector, another third from the telecoms industry, and the final third from the wind industry. Occasionally, we also get orders from the offshore industry. We’re also always happy to supply lighting masts. We’ve never needed to advertise much, because our major customers already know our brand, and that we are a reliable, quality supplier with a reasonable price. We are currently benefitting from the boom in the wind industry, and the global roll-out of the 5G mobile network, which needs twice as many masts,” explains Jensen.

“We expect record turnover this year, but want to continue growth, which is why we've just optimised our website and opened an online store. That required a greater degree of standardisation, which means more standard products will be on our shelves than we are used to.”

“We are pretty unique within our field, because we have excellent engineers who focus heavily on how we can use as little steel as possible and still have sturdy products. We have full control over everything produced in-house, and I want to be able to retain the flexibility that gives us. Our products may look simple, but a lot of specialist knowledge has to go into design and production to make them, which is why it’s almost impossible to copy them. Carl C. has become a brand that leading industry giants, such as Vestas, have helped promote by using our masts for measuring devices. We look after and nurture our brand very carefully. But we are of course automating as much as we can, introducing more robots where it makes sense.”

“They are key to Production. We simply cannot find the welders we need in Denmark. That's why we look after our foreign colleagues, and luckily, many of them want to stay on. We can see that through the number of courses in Danish we run with LærDansk. The ones that go on the course want to get on here, and are perfectly willing to bring their families to Denmark. We feel that benefits the entire area. We’ve also found it hard to find the number of apprentices we want. I’m a member of the local apprentice committee at the Technical College in Skjern, and on an expert committee run by the local council that acts as a key think tank. A lot of our discussions are about how we can attract the right educational programmes to the area, and how we can continue to find qualified workers.”

Carl C. is inviting everyone to come and celebrate the company’s anniversary on 4 October 2019.

“Everyone’s welcome, and we expect over 400 people on the day. There will be a signposted guided tour around the business with working stands, so that visitors can see what we make and what our masts are used for. We have just bought a new mobile crane which will also be on show,” states Jensen. 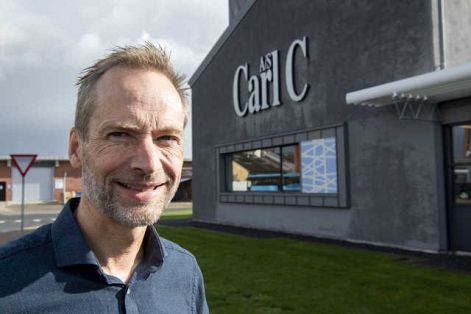 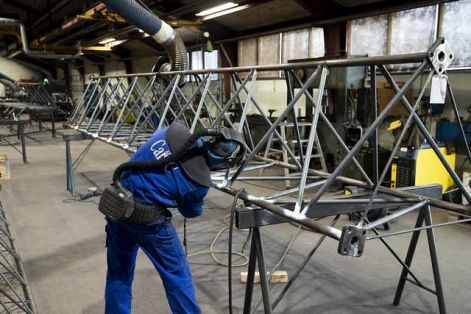 A lattice mast is under production in the factory at Smedevej, Skjern. The company currently has 65 employees. Photo: Jørgen Kirk 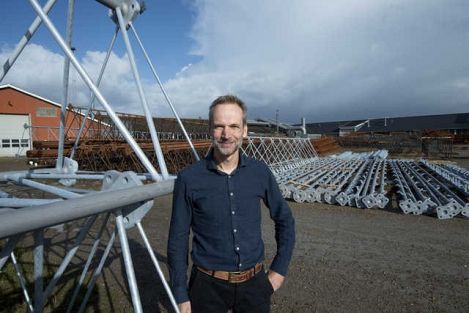 Carl C. is growing in line with the energy sector, the wind industry and mobile industry, and demand for masts is so high that CEO Allan T. Jensen is considering expanding into the space between the production buildings. Photo: Jørgen Kirk

Carl C. A/S was formed in 1969, when Carl C. Jensen and his wife, Elisabeth Øllgaard Jensen, rented premises in Lem.

The company started out by manufacturing steel structures for the construction industry, and it offered to carry out special tasks for power plants.

As a result of technological developments, the need for lattice masts and parabolic reflectors increased during the mid-1970s, and Carl C. was actually one of the first in Europe to develop parabolic reflectors for community aerial installations and telecommunications. News of this company’s lattice-mast expertise spread like ripples in the water. This led to large shipments of wind-turbine masts to the US, India and China, as well as several European countries, so when the need for mobile-telephony masts arose in the early 1990s, Carl C. A/S was accordingly well-prepared to supply telecom operators throughout Europe.

A change of generation took place in the top management in 2006, when Carl and Elisabeth’s son, Allan T. Jensen, took over as sole owner.

He qualified as a Mechanical Engineer from Aarhus Technical University, and became CEO of Carl C. in 2003.

He is married to Dorthe Jensen, who works at Midtjydsk Fornikling & Forchromning as an engineer.

The couple have two daughters: Julie, who is in higher secondary education, and Freja, currently attending High School in Wyoming, USA.

Allan’s hobbies including hunting and running. He also used to cycle, but has recently switched to badminton. 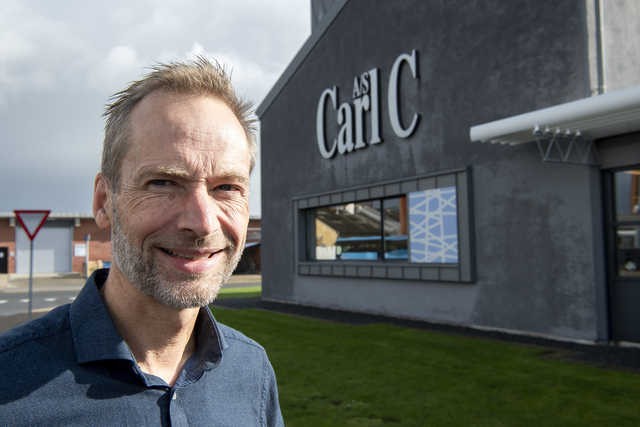